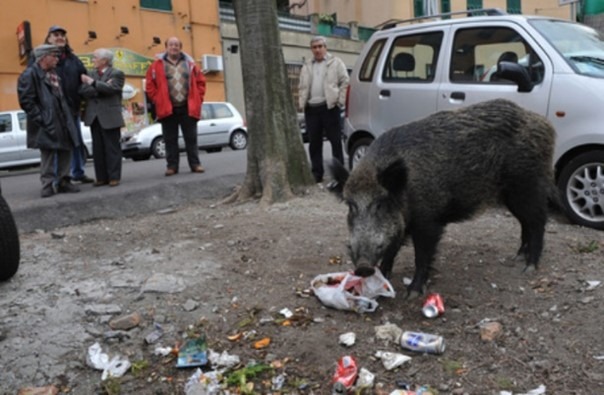 To contain the spread of the new virus, many countries around the world instituted lockdowns or strict restrictions of people’s mobility outside their residences. Lockdowns contributed to an improvement in the quality of air, cleaner rivers, less noise pollution, undisturbed natural habitats, and calmer wildlife, determining an effect defined “Anthropause” or “the Great Pause.” The crisis has not only affected mankind but it has also impacted over the wildlife globally. The whole world has stopped functioning and this has made a significant impact over nature and wildlife which has once again reclaimed its territory into the cities and urban areas.

Wild boar in the cities

Wild boar thrive under a wide range of environmental conditions and are widely distributed around the world, even if their physical presence is largely unnoticed by the public because of their concealed lifestyle and mostly nocturnal activity. Nevertheless, this large mammal influences ecosystems in many ways and is considered an ecosystem engineer. Wild boar is a master in this: they have “expanded” by exploring new habitats, previously exclusively for human use, and have also increased their activities in urban environments. Usually active at night, in fact, during the lockdown they showed up even during the day. 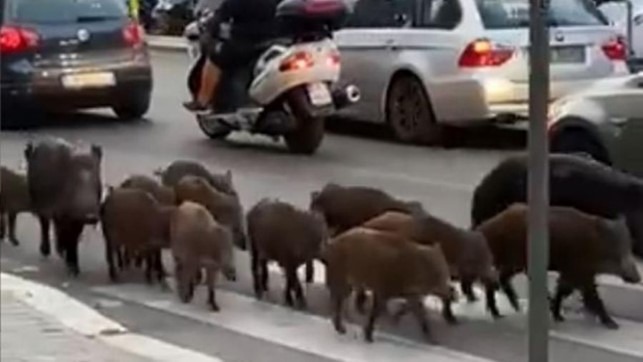 And so, we have wild boar emergencies in the cities, as well as in rural and agricultural areas, and even in protected areas. Big cities like Rome, Barcelona or Berlin have already experienced what was depicted by media as a sort of ‘invasion’.  The wild boar is omnivorous, feeds on plants, tubers and rhizomes (thus damaging gardens and flowerbeds) and also on earthworms, insects, small vertebrates and eggs (impacting animal biodiversity). But in peri-urban and urban areas the species can also find easy food, represented by rubbish. They can also be vectors of pathogens that can be transmitted to domestic animals, pets and humans as well. All this can justify the worry for this intrusive presence during the lockdown.

The spread of wild boar towards spaces occupied by humans is likely related to an overall numerical increase due to a lower mortality in the pandemic period.

Hunting, representing the main cause of death in most countries, was restricted during the lockdown. In some European countries collective hunting was banned, in others it was discouraged by other restrictions. In general, however, the hunting pressure on wild boar has been reduced for many months. 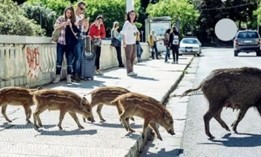 The spread of wild boar towards spaces occupied by humans is likely related to an overall numerical increase due to a lower mortality in the pandemic period.

Furthermore, the lockdown effect on the traffic-related mortality was studied and comparing the pre-pandemic (2018 and 2019) and pandemic (2020) years, animal rail/road-kill levels during the lockdown period were about 50% lower. Based on literature data, this may mean at least tens of thousands of animals, and wild boar among them, have survived on a national scale.

Of course, the possibility of sanitary problems is not to be overlooked, since this presence has increased the chances of exposure of domestic animals and humans to the wild boar, reservoirs for many important infectious diseases.

So it is important to start intensive research on possible demographic and genetic effects of this unique phenomenon: how stable the effect of the COVID-19 pandemic has been on wildlife? and how the lockdown (the anthropause) may have affected the demographic trends of wild species?

The occurrence of wild boar in anthropized environments is also monitored through tools such as iMammalia, which are easily usable by anyone who might happen to spot an animal rooting in a garden or feeding from a rubbish bin.

In this, citizen science can play an important role by providing a cost-effective and engaging way of collecting data across multiple locations during and after lockdown measures.

The current closure of large parts of society has returned the world to levels of human mobility observed only a few decades ago, allowing researchers to study how even small shifts in human behaviour might have a dramatic beneficial impact on species around the globe. 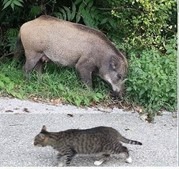 Probably, the changes induced by the confinement have been too drastic and sudden and did not last long enough to allow the colonization processes to occur: no invasion therefore, but a demonstration of the great adaptability and flexibility to changes and of resilient behaviour in front of human presence (or absence) impacting on the habits of a wild species.